Gardiner "Then and Now" 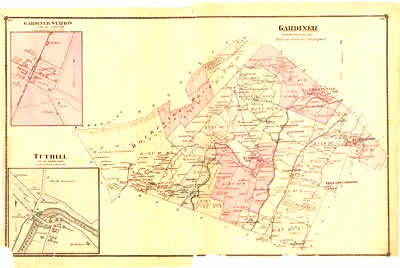 The goal of this project is to compile a photographic survey of the Village and Town of Gardiner and the immediate area.  Using old postcards and photographs, I will re-photograph the same views, from as close to the original viewpoint as possible, and publish a series of "then and now" paired images, along with descriptive text.

A small group of local postcards in the Gardiner Library Local History Collection inspired this project. I am looking for more images to add to this project.  If you have any postcards or photos that show recognizable local views, buildings, or homes in the Gardiner area, dating from the mid-1800s through the mid-1900s, I would appreciate a copy or scan to add tothis series.  If you can't scan them, I can arrange to scan the images myself.  If you have any images you are willing to send me, please contact me at: jmurphy@rcls.org

Thank you for your consideration, and enjoy the project!
Jack Murphy Part One
THE VILLAGE
The Gardiner School

This circa 1897 view is of the Hamlet’s first school house in Gardiner School District No. 2.  It was built in 1880 as a one-room school, and in 1895 a second room was added.  The school was closed in 1981, when Gardiner became part of the New Paltz School District.
Another View of the School
This postcard shows the Gardiner Public School, circa 1910. The school was closed in 1981, and the building, located just east of the Village on Route 44-55, became the Town Hall,  Justice Court and Community Meeting Rooms shortly after the closing.
South Street, Gardiner, N.Y.

This view was a slight problem, as I didn't know of a South Street.  After some looking around town, i realized it was actually the northern end of Sand Hill Road, at Routes 44-55.  The house on the left is 2 Sand Hill Road, the building on the right is 119 Main Street, now Hudson Valley Wine Market.
Another South Street Postcard

Here is another view of the house at 2 Sand Hill Road (once South Street).
A Corner in Gardiner

This vintage photo postcard is titled "A Corner in Gardiner, N.Y." The corner is Main and First Street, looking north up First (now Dusinberre Road). The building on the left  hand corner is 120 Main Street, and on the right is Moran's General Merchandise, now Majestic's Hardware.
Looking North From Main Street
This early 1900s photo postcard is captioned "Looking North From Main Street, Gardiner, N.Y." It pictures the intersection of First Street (now Dusinberre Road) and Main Street (Routes 44-55). The building in the foreground was Moran's General Merchandise, operated by John Moran for over 50 years.  He died in 1956, and the store closed in 1958.  George Majestic, had a hardware and plumbing supplies store in Gardiner, which had occupied two separate locations on Main Street over the years.  After the closing of Moran's Merchandise, he bought the building and moved his business into this location.  Majestic's Hardware still operates out of this building and location.
First Street, Gardiner

This view of First Street (now Dusinberre Road), was taken from just north of Main Street, standing in front of Majestic's Hardware.
The Gardiner Post Office

This photo show the Gardiner Post Office, circa 1900. The address is 129 Main Street, on the south east corner of Main and Arch Streets. The Gardiner Hotel was just west of this location. The Postmaster from 1899 - 1915 was Dr. M.E. Stephens, Physician. The building is an apartment house.
Main Street from Arch Street

The Gardiner Fire House, built 1909.
This building was Gardiner’s first Fire House, and was used as such until the Fire Department moved into a new building on Main Street in 1964.  In 1975, a book exchange club was formed using space in the Gardiner Reformed Church.  By 1977, they needed more space, and the Town Board allowed them to move into the empty Fire House, creating the Gardiner Library. By 2008, the Library had out grown this location, and moved into the then newly built Library building off Farmer’s Turnpike, where it is currently located. This building is currently a private residence.

This postcard view shows Moore's Hotel, located at what is now 139 Main Street, just west of where the railroad station had been located. At some point, the building also housed the Odd Felows Hall.
Tremper's Garage

This photograph, taken circa 1937, shows the Moore's Hotel building again, but by this time it is Tremper’s Garage, south west corner of Main Street and Station Square.
The Center of Gardiner Village

This view, from about 1900-1905, is of the Gardiner Reformed Church and Parsonage on the north side of Main Street, between Fourth and Fifth Streets. The Church was built in 1892-1893, and the Parsonage in 1896. The land for the building was donated by the then President of the Wallkill Valley Rail Road, Floyd  McKinstry. Part Two
BEYOND the VILLAGE
The Terwilliger House

This stone house, built on the banks of the Plattekill Creek, is located on Route 32, just north of Jenkinstown Road. It is thought to be the oldest home in Gardiner.  It was built by Evert Terwilliger, a Dutch settler, and his wife Sarah Freer Terwilliger of New Paltz, a French Huguenot, in 1738.  The house was purchased by Josiah Hasbrouck in 1805, and he resided there during the construction of his mansion on the property.  The house was later by Hasbrouck's tenant farmers.
The Josiah Hasbrouck House, Locust Lawn

Josiah Hasbrouck served in the Ulster County Militia during the Revolutionary War, was a member of the New York State Assembly, a U.S.Congressman during the administration of Thomas Jefferson and New Paltz town supervisor. He was a descendant of Huguenot Jean Hasbrouck, one of the original patentees, of New Paltz. In 1805, he and his wife, Sara Decker,  bought the Terwilliger house and adjoining acerage, and began work on their Federal style mansion, completed in 1814, and known as Locust Lawn.  The Estate is located a few miles south of New Paltz, on Route 32.  Descendants of Josiah and Sara occupied the house until 1885.  The home was donated to New Paltz Historic Huguenot Street in 1958, and is now owned and operated by the Locust Grove Estate of Poughkeepsie.
The Cole-Hasbrouck-Delamater House, Modena

Another View of The Ireland Corners Hotel

The Farmhouse of Dr. Abraham Deyo

The Hamlet of Benton's Corners